Sitting in his office in Boelter Hall, I imagined that Professor Eliezer Gafni seemed to fit the image of the typical Israeli—he is blunt, enjoys hiking, and has a huge Indian tapestry hanging on his office wall. The mountains of books and papers strewn about and the unintelligible equations scribbled on the white board also reinforced his similarity to the proverbial computer-enthusiast, right at home in this super-geek paradise. However, it was not long before his eclectic personality shone forth, and that image of what was typical shattered against a complex reality. The tapestry is not, as one would guess, a memento from a life-changing journey to the far east following years of drudgery in the IDF, but a gift from an appreciative student. Even if there were a “typical Israeli,” it would certainly not be this man.

Eliezer Gafni grew up in a religious-nationalist community in Tel Aviv, where his education was strongly informed by Jewish tradition and Zionism. This identity met its first challenge in the few years before he turned 18—the age at which all Jewish Israelis are conscripted into the Israel Defense Forces.

As a teenager, Gafni participated in a street celebration for an IDF armed division. At some point during the festivities, he found himself in the belly of a closed tank, and he discovered that he is terribly claustrophobic. Unable to see himself joining a combat unit, Gafni decided to serve his country in the way that he knew would best capitalize on his personal talents.

As part of an agreement with the IDF, Gafni enrolled in the Technion and studied electrical engineering on the condition that he would thereafter apply his skills toward an extended five year service in the IDF.

During this time at the Technion, Gafni initiated a romance with academia that has lasted until today. After his first degree (and his army service, as promised), he decided to pursue higher education in the United States. He completed his M.A. at the University of Illinois and his Ph.D at the Massachusetts Institute of Technology, both in Electrical Engineering. His research and thesis, which pertained to the Internet, attracted the attention Leonard Kleinrock, another Jewish computer scientist, whom we in the computer science world recognize as the “father of the Internet.” Kleinrock enlisted Gafni into the computer science department at UCLA in 1982, and he has been here ever since.

I asked Gafni about his current research. He responded that it has become so abstract and theoretical that most would consider it irrelevant,  equating it to the study of “how many angels can dance on the head of a pin.”

Although not of Talmudic origin, Gafni’s allusion to the medieval metaphor for time-wasting harks back to a distant pastime of his. During his childhood years spent in the insular Bnei Akiva atmosphere of his Tel Aviv community, Gafni committed long hours to studying Talmud, and he was acknowledged as a very promising student.

“They predicted I’d be a Rabbi. They weren’t too far off the mark,” he quips.

In the 11th grade, Gafni began studying at Netiv Meir, a yeshivah in Jerusalem, where he focused heavily on Talmudic studies. He hated it. While he enjoyed the intellectual stimulation, he could not justify spending so much precious time exposed only to his own culture, to the exclusion of all else.

Gafni hypothesizes, “A lot of brainpower went into the Talmud, but it would have contributed more to the world had it been applied to math.”

Gafni’s disenchantment with Orthodox Judaism had its roots in experiences as early as the fifth grade, when he began to doubt that which his classmates took for granted, such as whether he would want animal sacrifices re-instituted in the Messianic era. Although the doubts progressed, and he eventually began to doubt the existence of God, Gafni continued to observe Jewish ritual traditions, as he did not wish to detach himself from his community.

But even this final remnant of his Orthodox past melted away when he began his higher education. At the Technion, it was easy to grow less mindful of practices, so he did, symbolically removing his kippah in his final year there. By the end of his army service, Gafni was completely secular. He decided to emigrate to the United States, attracted by the opportunities it offered and the “free love” with which he associated America life.

While he stripped himself of his religious identity, the State of Israel never lost its significance in Gafni’s mind. In 1989, he spent a year in Israel on sabbatical from UCLA. He expresses that he wishes he had stayed there.

“Israel is fun. Life there is very fulfilling. As long as you ignore the politics.”

Of course, such a feat proves to be exceedingly difficult, especially when one has political views like Gafni does. Fortunately, the easiest place for him to avoid Israeli politics is at his post at UCLA. At times, the anti-Israel sentiments on campus become difficult to ignore, such as during Palestine Awareness Week, when Israel is theatrically demonized on Bruin Walk, and the emblematic wall recalls his claustrophobia. However, Gafni believes that such debates on campus belong to the students, and professors would only exacerbate the tension by getting involved.

After my conversation with Professor Gafni, I peruse the photos to which he referred me on his personal website. Therein, I see him posing with his wife and children in various exotic destinations throughout the world. His love of life and self-determination have brought him to such places as Peru, Norway, New Zealand, and Siberia. While the idea of a “typical Israeli” evaporated within moments of meeting him, I did not expect to forgo yet another generalization: that of the “typical computer science professor.” 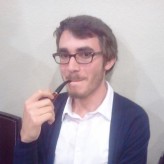 Tenure Shields Professor From the Consequences of Hate Speech