Batsheva Dance Company at Royce Hall: dancing with the ground, falling to the stars

The chitter-chatter dies abruptly. The lights dim, except for up front. If you are not in your seat, rush back to it. Make sure your cell phone is shut off, or at least set to silent mode. You’ve probably forgotten to do that last part. The stage holds your attention. The show has just begun.

The Batsheva Dance Company performed their 2011 piece, Sadeh21, at Royce Hall on November 1 and 2 as part of their 50th anniversary celebration world tour. The company’s namesake is the Baroness Batsheva de Rothschild, who founded it in Tel Aviv in 1964 with the help of Martha Graham, one of the most influential modern dancers.

A low, plain white, barren wall marks the back and side boundaries. A single dancer struts onto the center of the stage. He begins to bend his body downward, reaching extremes you didn’t know were possible. He darts around the stage, as if compelled to do so, interacting with forces and objects only he sees. A combination of dexterity and strength craft his precise movements. Then he walks off, just as another replaces him. This repeats a few times, and each dancer is just as breathtaking as the other.

I heard about the show at a screening of the documentary “Let’s Dance,” hosted by the Center for Israel Studies. The film covers the history of Israeli dance and features this dance troupe prominently. After the screening, professor of Israeli visual culture Anat Gilboa and Melissa Melpignano, a Ph.D. student at the UCLA Department of World Arts & Cultures/Dance, held a brief discussion about the film. One of the topics that arose was what made Israeli dance unique, and specifically its “grounded” nature. Melpignano had trouble putting what this means into words, and even with the help of dance members in the audience a clear and concise definition eluded us. I figured I had to see it for myself in order to understand it.

The series of solo performances gives way as two dancers simultaneously walk on from opposite sides of the stage. They meet in the middle, but just before they embrace they are jolted away. They are clearly connected by some ethereal bond, which prevents their separation, but they are only ever briefly in complete harmony. Then they walk off, just as another pair replaces them.

I got to the show a little early and as I was alone I was free to wander. I gravitated towards the terrace to catch some fresh air and solitude before entering the crowded theater. I was right about the fresh air, but wrong about the solitude. An interview was being conducted. Sitting a few feet away, with a large crowd standing nimbly around him, was the uber-cool Ohad Naharin, the company’s artistic director since 1990. He described his practice of not using mirrors in the studio, as mirrors provide us with an image, which distracts us from the internal feelings that produce that image. This applies not only to dance but also to our everyday lives. Earlier in his life, Naharin spent four years without using any mirrors, a feat which is unthinkable to most. Especially nowadays, as a result of our habitual use of digital technologies, it has become increasingly difficult to feel truly and wholly present in the current moment. Time has become a constant concern for us, and yet it is this worry, which detracts from sensing the “plentitude of time.”

Naharin went on to relay some details of the dance, which at this point in the article you are familiar with, such as the fact that it begins with solo performances. I somewhat jokingly interjected, “Spoiler alert!” so Naharin explained that he had the exact opposite intention. He called these elements of the performance the “gossip.” They are the most noticeable features, which easily grab your attention but ultimately may distract you from the deeper experience. He wished that we could have been watching it for the second time so that our minds would be clear of all the trivialities. When the company practices in a studio with mirrors, they cover them, and I believe the intention of this talk was to cover the mirrors in our minds.

The show continues without interruption, although each scene is clearly demarcated by the projection on the back wall of the word “Sadeh,” followed by a number. The counting starts with 1 and ends with 21, with the help of some tricks. Sadeh is the Hebrew word for field, but each Sadeh transports you to a different universe. The dancers embody the various organisms that inhabit these strange worlds and are enveloped by the thick space of the atmospheric music and ambient lighting. 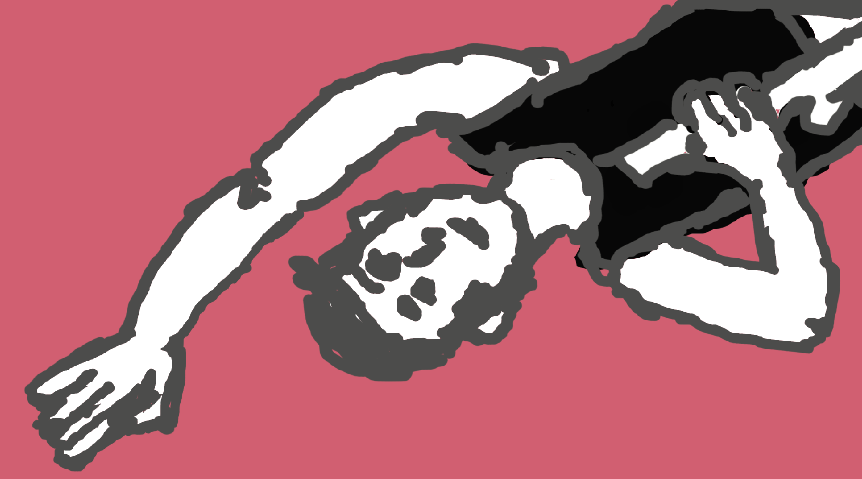 I spent much of the performance in utter awe, and my internal monologue had difficulty formulating words. Despite this, there were many themes that managed to feel their way into my mind. The term Sadeh may be an allusion to the battlefield, and there are many clear references to the military. The most overt was the way the show started and ended, but I don’t want to spoil those surprises; I think even Naharin would agree with me on this. But others were recurrent, such as the strange swift motion of an individual dancer reenacting the firing of a gun, the bullets flying toward their target, and the resulting damage upon impact.

A man inches along the stage with a woman draped motionless over his shoulders.

Sadeh may also be referring to the work field. There is a strong historical connection between the land and dance, as the kibbutzniks who nourished the land of Israel back to life were known to erupt in folk dance at a moment’s notice.

A small group of dancers lock hands in a circle formation and slowly rotate. One by one the rest of the dancers join in, until all 18 are united as one.

However, neither of these frames is sufficient on its own. As is often the case in Israel, the battlefield and work field are one and the same. The performance is not attempting to dictate messages but rather to convey emotions. An Israeli is forced to confront certain sad realities as a result of the conflict in the region, but also universal human feelings and frustrations. The show managed to evoke the entire spectrum of sensations, often in paradoxical combinations and levels of intensity, which were bearable only as a result of the intermittent comedic surprises.

A man stands still as a woman to his side starts to smack his torso and back. Her pace quickens and power increases but the man remains motionless.

The world we live in places many limitations on us. Our bodies put limits on our movements, our words put limits on our minds, and all is ultimately limited by the passing of time. We attempt to overcome these limits by chasing love or joining groups or dancing, but all this achieves is expanding our understanding of what our limits are. You can never completely escape yourself. All one can ever hope for is fleeting moments of sublimity in which time becomes irrelevant and one feels simultaneously transcendent and grounded. I spent the entire 75 minutes of the performance in and out of this state. I ended up fulfilling Naharin’s wish and watching it again the second night — and now I long for my next opportunity. I hope you get a chance to watch it, and I hope reading this article will have helped you tap into the tremendous powers of this performance.

A man directs his attention towards the audience and begins to talk in a high-pitched, made-up, and muffled language. His words are unintelligible, but his tone and emotions are enough to reach through to your heart. You chuckle, but also feel sorry for him as he is reluctantly forced off the stage.

Moshe Kahn is a fifth-year student majoring in Computer Science and minoring in Cognitive Science. Finishing his degree has become a challenge as he has come to learn that he is more interested in the Humanities than in Science. He does not have plans for next year, but hopefully will find something he is passionate about. He is uncertain about most things and is constantly trying to make sense of the world he has been placed in. He enjoys connecting with other people through thoughtful dialogue. Many people consider him philosophical, but he likes to think of himself as 'subtle'. He has a sensibility for design and believes he has reservoirs of creativity which are largely untapped and worth exploring.

Campus rabbis: the mensches and martyrs of UCLA