“The real voyage of discovery consists not in seeking new landscapes, but in having new eyes.” — Marcel Proust

As a graduate embarking on a ‘year off’ before law school, I find myself curious to see the world while the shackles of adulthood are still quite loose. My personal wanderlust is fueled both by an innate curiosity for the unknown — one I’d like to believe is found within all human beings — and my intent to embrace adulthood with authenticity.

My life thus far has been a product of a relatively predictable (and banal) lifestyle model, and I find myself questioning how many layers of my personality I have yet to peel back. The “self” that stares back in the mirror is just one face of many to be discovered. As I learn more about myself, whether through a challenging scenario or by virtue of learning new familial history, I cultivate a new dimension to myself; after all, my identity is contingent on my relations with others, too.

I believe that in the United States we take for granted the beauty of Judaism — as a religion, a culture, a people — because we have the privilege to grow up in such a liberal environment. Liberalism is a virtue, but unfortunately, it has also contributed to the watering-down of culture. The most cliché understanding of “Jew” looks like Woody Allen — Ashkenazi and neurotic. More nuanced approaches to Judaism don’t extend much further than the inclusion of hairy and boisterous Sephardic Jews. I didn’t even know about Mizrachi Jewry until sophomore year of college — and I am a Mizrachi Jew. (I always assumed I was Sephardic because my genealogy doesn’t stem from Europe.)

Just like Ashkenazi Jewry is not the only branch of Judaism, Israel is not the only Jewish locus. The State of Israel is magnificent, but she is not the only place Jews can go to for spiritual experiences or connection to our culture and religion. Until 1948, Jews were a diasporic nation, wandering all parts of the globe. Jews have had enormous impact North, South, East and West, and there are a myriad of Jewish sites that deserve our attention.

Although I still have yet to see the typical destinations posted on inspiration boards of fellow wanderlusters everywhere (i.e. Eiffel Tower, Great Wall of China, etc.), I find myself yearning to explore Jewish history in the crevices and corners that Israel overshadows. Connecting with myself in the most authentic manner possible requires me to explore my Jewish roots; this includes not only my ancestors in Central Asia, but Jewish imprints left all over the world. We are a nation — despite the denominations and characterizations with which we love to label one another and ourselves — and we can only truly understand ourselves in light of one another.

I have compiled a modest list of Jewish destinations spanning that globe to add to your travel itineraries. But remember: the destination is merely a catalyst to get you up and out into the world. Put the Instagram aside and be authentic in your pursuits of knowledge, of self-discovery.

This museum commemorates the 30,000 or so Jewish refuges who fled Europe during World War II for Shanghai. It consists of the former site of Ohel Moshe Synagogue and two exhibition halls. The synagogue is one of two built in the area by Russian Jews of the time, and has since been renovated with the original architecture drawings found in city archives, with the use of allocated funds specially budgeted by the People’s Government of Hongkou District. One exhibition hall features over 140 photos, a short film, paintings and sculptures, as well as ancient relics like refugee passport duplications and newspapers. The second exhibition hall is put to use for novel exhibitions. The experience also includes exploring former sites of Jewish refugee shelters, Huoshan Park, and Mascot Roof Garden, which often holds concerts by Jewish musicians.

The old Jewish Quarter, or the mellah, was created in 1558 to house the Jewish community. Until the French arrived in 1912, Jews could not own property outside of the mellah, so it became an area rich with fountains, gardens, synagogues and souks. Although the present mellah is smaller than the original and is now nearly entirely Muslim, remnants of Jewish life remain, such as the striking Alzama Synagogue. Adjacent to the Jewish quarter is the largest Jewish cemetery in Morocco — simply named “Jewish Cemetery.” One traveler classified her experience as impressive and humbling: “The cemetery is very powerful as you contemplate the sheer volume of modest tombstones […] against a backdrop of heat and the call to prayer from the nearby mosque.” Entrance is free, but donations are encouraged to assist with the upkeep, which is currently being conducted by a Muslim family. 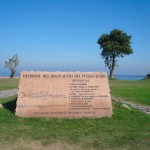 “The Memorial to the Holocaust of the Jewish People in Punta Carretas, Montevideo, Uruguay” by 2013 (Creative Commons Attribution 3.0 Unported)

Uruguay houses the only Holocaust memorial in South America, an outdoor monument built in 1995, overlooking the tranquil waves of Rio de la Plata. The memorial is made of granite slabs engraved with quotations from Maimonides and Elie Wiesel, amongst others, and features the story of the country’s only-known Holocaust victim, Ana Balo. Aside from the memorial, Uruguay has extensive remnants of Jewish life, including a square named after Golda Meir near Téatro Solis, a major opera house, as well as a Jewish cemetery commemorating victims of the Holocaust, fallen Israeli soldiers, and victims of the AMIA terror attack in Argentina. 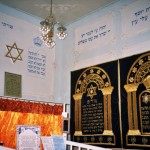 Bukharan Jews originate from the Central Asian khanate of Bukhara, which spans across the former Soviet Republics of Uzbekistan, Tajikistan and Kyrgystan. These Jews claim to be descendants of the Tribes of Naphtali and Issachar of the Ten Lost Tribes of Israel after the Assyrian exile in 7th century BCE. They lived in Persia until the Sassinids conquered the region in 224 AD. Bukharans are considered to be one of the oldest ethno-religious groups in the region, equipped with their own language (Tajik-Persian) and customs (many of which have Muslim influence). Their synagogues are truly unique sites. The Bukhara Synagogue is one of the oldest in the region, containing ancient Jewish artifacts, including a Torah that is said to be 1,000 years old. Each synagogue provides a new dimension of insight into Jewish life in Uzbekistan. (These sights have personal significance, for I was born in Samarkand.) 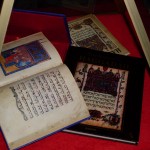 This museum is housed in the country’s oldest synagogue, built in 1581. It is located in old Sarajevo’s Oriental quarter, Bascarsija, and is considered to be the “finest exhibition space in the whole of ex-Yugoslavia” according to experts. The building was originally a residential facility for Sephardic Jews expelled from Spain in 1566, but became a prison during World War II. The museum’s ground floor consists of the synagogue and its relics; its first upper gallery details Jewish life in the area before the Second World War, and the second gallery serves as a tribute to those who perished in the Holocaust, as well as non-Jews who assisted the Jews during the time.

Angelina is a fourth-year Political Science student minoring in English. She enjoys the obscure, the romantic, and the extravagant, and her taste in literature, music, and film reflect this. To ground herself in reality, she partakes in various forms of community service, ranging from serving as UCLA Rotaract Club's vice president to the treasurer of Chabad at UCLA. To de-stress, she does things housewives do: scrub bathroom tiles, bake bread, and drink martinis. Sometimes she spends time reading and/or writing near large bodies of water. She considers herself a paradox — a dreamer with no dream — and is exploring her own depths day by day. In case you're wondering, she's an aquarius.

Recovering the plundering of the Holocaust

The path from Hebrew major to the Alan D. Leve Center for Jewish Studies, 56 years in the making