Last Thursday afternoon, I had to ward my house from cops. Apparently the good Samaritans on frat row, or perhaps passersby, were concerned and decided to let someone know that four “vandals” (as some people had assumed) were parked in front of the Bayit blasting rap music and spray-painting our front wall.

The three artists dedicatedly painting until the late evening were all famous graffiti artists who travel and beautify the world one wall at a time. The dude sitting back in the supervisory role, whom the Samaritan probably assumed to be their accomplice, was Craig Dershowitz, Executive Director of the non-profit organization Artists 4 Israel.

And they weren’t trespassing or vandalizing our property, they were sponsored to come and paint on the UCLA campus.

Artists 4 Israel brings graffiti and street artists to Israel to cover up buildings that have been exposed to war, revitalize communities in need, and expose international artists to the reality of what life in Israel is like. One of the three artists just got back from Israel a few months ago, where he painted three 30-feet tall murals in Netanya and some smaller ones in Jerusalem and other cities. A year and a half ago, another artist was in Israel with a group of female artists, touring and painting the country from north to south. The artists were even invited by Knesset Speaker, Yuli Edelstein, to paint at the Knesset building.

The man behind the idea, and a self-acclaimed “vandal,” Dershowitz grew up in a housing project in Brooklyn, where he, since his childhood, was deeply involved in the Black Liberation Movement. With time, he realized that the idea of a people seeking a national homeland, freedom and protection against those who oppress them is not just a story of the African-Americans, but of Jews around the world.

Dershowitz believes that Zionism is indeed the attempt of Jews to reestablish their home in Israel — where they belong. In founding Artists 4 Israel with his co-partners, his goal was to educate artists about Israel and the conflict, and create a space where they can promote these positive feelings to their fan bases through the creative medium of their choice. 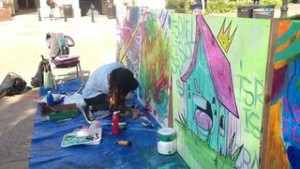 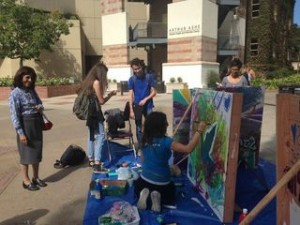 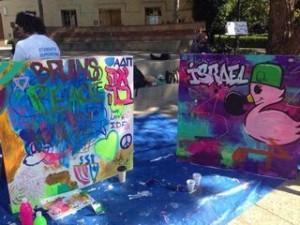 For those of you who’ve been trying to figure out the hidden Jewish or Israeli symbols, allow me to reveal the secret: there are none.

The names and graphics you see are those unique to the artists themselves. The mural is not about showcasing their abilities to collaborate on an abstract design catered to Jewish or Israeli values. As Dershowitz said, “Politics aside, the idea is to create something beautiful. You wouldn’t bring Picasso to do a paint-by-numbers. One of the biggest issues I see in advocacy in general is that we always try to make other people fit into our box. The pro-Israel community comes up with what they think is the message and makes everyone then fill in and fit into that. And that prevents any kind of dynamism or progress, because everyone is sort of racing toward the same middle ground that hasn’t worked. We’re trying to give people the ability to use their own strengths to express themselves.”

The group was brought to UCLA by Students Supporting Israel. Prior to the Bayit graffiti event, the artists and SSI members spent time in Bruin Plaza and invited passersby to ask questions, talk about Israel and paint. The way the artists chose to engage people in discussing Israel in these times of turmoil and unrest is especially unique and a commendable idea.

On behalf of the pro-Israel Jewish community, the Bayit, and anyone who will ever walk down frat row, I would like to thank Artists 4 Israel for beautifying our space and showing us how simple and powerful advocacy can be if you think outside the box.

A conversation with Ethiopian actor and activist, Shai Fredo