Why should you care about the primary?

What if I were to tell you that we have ruined democracy? Would you believe me?

Millennials outnumber both Generation X and the baby boomers, yet our influence on politics is far less pronounced. Our generation skews tremendously towards libertarian political values, meaning that we may be fiscally conservative but we are socially liberal. Many experts predicted that demographic shifts would require a tremendous overhaul of the Republican Party to appeal more to millennials, but so far, that has not yet happened.

It has not even been close. Instead, what we have now is a radicalization of conservative politics. Candidates like Ted Cruz, who is as conservative as one can be in every conceivable sense, have prospered. Donald Trump’s proposals on banning Muslims and deporting more than 11 million immigrants ought to alienate our generation’s diverse and accepting views, but he is the front runner. A candidate like Richard Nixon (who founded the Southern Strategy that has shaped much of Republican politics today), probably would not even be able to run as a Republican in this day and age, since he would not be considered conservative enough. 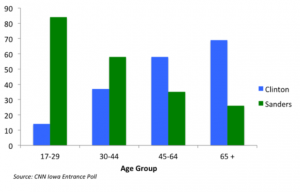 Even though the Republican Party has not adapted to accommodate the majority of Millennials, it has not failed; in fact the party, with all of its escalating conservatism, has occupied more seats in the Senate than Democrats for a while now. It is instead the Democratic Party that seems to be more on the verge of disaster. As of this past fall, Republicans now control 70 percent of state legislatures, more than 60 percent of governors, 55 percent of attorneys general and secretaries of state, and both chambers of Congress. It also looks like the Republicans could very possibly win the White House and with it, a tremendous majority of the Supreme Court (four justices will be more than 80 years old during the next president’s term). I do not support either party, but does it not seem weird that the Republican Party is winning all of these elections? It is harmful to democracy in a two party system when one party achieves total political hegemony.

For the continuation of a healthy democracy, these primaries are very important. Forget about the White House for a second, and whether the Democratic Party will collapse or claw its way back to the top. I know it’s hard because of the reality-TV-like scene that has unfolded before us, but there is much more to this picture. Neither party has budged to accommodate our generation. The future of American politics seems to be whirling away from us faster and faster.

Here is an example. The fun chart below shows an entrance poll for the Iowa primaries. As you can see, the youth vote carries an opinion vastly different from other generations. Ultimately in Iowa, less than 20 percent of millennials showed up to vote and because of that, Clinton was able to pull off a tie. But it is not about Bernie vs. Hillary. It is about what the effect of our vote is. If more than 80 percent of the largest generation wants something, you would think that people would bend over backwards to make sure that they accommodated those people’s opinions. Otherwise, they would lose out tremendously. Unfortunately, we do not care very often. How many people voted in midterm elections? And even when we do care we do not show up to vote in substantial numbers, like what happened in Iowa. Because of that, our generation is ignored and relegated to the kids table, and we accept it.

What makes Bernie Sanders so interesting is that he is appealing to young voters. In fact, he thinks he can win on the youth vote alone. We need to listen to Sanders. You do not have to vote for him, but you should listen to his message that our voices are important. This primary cycle is important because it is a good place to learn more about our political system. Information about politics is everywhere, and everyone has an opinion. At minimum you have a moral obligation to listen, and when you hear people talking about politics, you should join the discussion.

The primary will most likely be decided before California, and even if it is not, what will your one vote do? That is a common opinion, but an incorrect one. It is true that your one vote does very little, but voting goes beyond the primary ballots. Voting should be a mechanism in which you research, listen, debate, and form opinions. Having an opinion about the primaries should be a springboard to becoming an informed citizen so you can influence those around you and make informed decisions, for all elections both big and small. In Jewish tradition, the need for a government to maintain order in the country is strongly emphasized. For most of Jewish history, we have been confined to monarchy, and for a significant part of that, we have been a dis-empowered minority in countries where we had no voice. We as a people should be especially enthusiastic and appreciative of our opportunity to be part of the process that governs our country.

If enough of us would come out and vote, the results would be drastic. If less than 20 percent of millennials showed up to vote in Iowa and they propelled their candidate to a tie, then imagine what even 50 percent could do, especially in a midterm election that has an already low voter turnout. If we do not want to be the invisible generation that was skipped over, then it’s time to convince them that it is unwise to ignore us. It is more important than ever before to be informed and to vote because despite our numbers, both political parties have blatantly turned their backs on us.

Daniel Peikes is a student at UCLA and writer for HaAm. He enjoys writing about politics, religion, and humor.